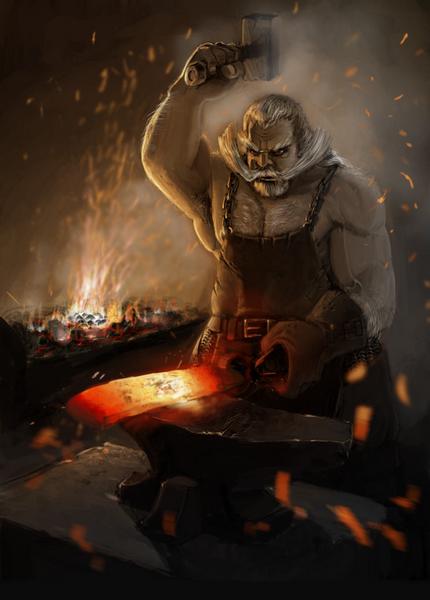 Johann is a world-famous weaponsmith, the greatest of his generation and two or three before. He traveled widely in his youth, learning techniques of forging from cultures across Avistan and beyond, even venturing as far as Garund, Tian-Xa, and the Flaeness. His maker’s mark is recognized even farther abroad than that, and his methods are taught to apprentices across Terra.

Eventually, he grew tired of his restless ways, and even more so the fame that brought a constant stream of admirers, eager students, and con-artists to him wherever he went. He found a place where nobody had ever heard of him in a newly-founded town called Home, in the heart of Varisia, and there he stayed. It didn’t hurt that he fell head-over-heels for a local warrior-woman, either.

The couple had one child, a daughter named Ingrid for Johann’s own mother, before his wife perished on the end of an ogre’s hook. Though he avenged her, much of Johann’s fire went out after that. He finished training his last apprentice, Michael Mathias, and laid down his hammer to raise his daughter and end his days in the obscurity he sought.

There was still a spark left in the man, however. He helped defend Home against the mad elven wizardess Anastriana, and watched approvingly Ingrid’s courtship with the other elf who fought against her. Nigh on three decades later, was there when his grandson Heinrick told the family he planned to set off into the wide world with Michael’s boy Jerard and make their fortunes. Perhaps urged by a reminder of his own restless youth, Johann took up the hammer and tongs once again, to forge one last masterwork, a going-away gift for the young man… a sword that would enter legend alongside the warrior who bore it.