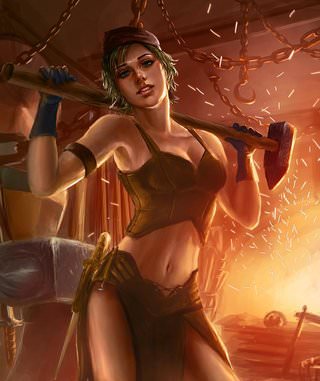 Daughter of the famous weaponsmith Johann Schultz and a Shoanti woman who died when she was very young, Ingrid had lacked her father’s talent for making weapons, but a great aptitude for using them. Favoring the heavy Earthbreaker maul of her mother’s people, she grew strong and skilled, and was generally acknowledged as Home’s best fighter by the time she was sixteen. She was in her early twenties, and captain of the Home town guard when a pair of elven visitors arrived, and the woman of the pair went violently insane.

When the wizardess was driven off, Ingrid initially distrusted the other elf’s apologies until she watched him working day and night to help repair his wife had caused. To help resolve her feelings, she challenged him to a sparring match. She decided she liked him after defeating him in a hard-fought match, and then drank him under the table at Home’s only tavern. Apparently the feeling was mutual, because Ingrid and Eldarinel Gilantheril were married less than a year later. Just over thirty years and two children later, they remain so, and continue to serve and protect the town of Home.

Ingrid is the mother of Heinrick and Astrid Gilantheril.